Bertha Bradford-Robinson, the first female African-American student to attend Louisiana Tech, will serve as the keynote speaker for the University’s two Fall Commencement Ceremonies in the Thomas Assembly Center Nov. 20 and 21. 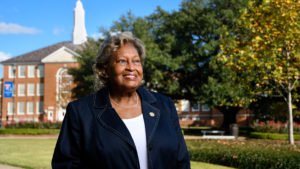 Bradford-Robinson is a Class of ’76 graduate and served as an educator for 40 years before her retirement in 2010.

In order to maintain appropriate physical distancing within the Thomas Assembly Center, graduates will be divided into two groups by colleges:

Tickets will be required to attend any of the weekend’s ceremonies.

Bradford-Robinson, who earned her degree in early childhood education from Tech in 1976 and has since been awarded an honorary doctorate from the University, will address graduates at both ceremonies.

“Unity is the gist, to come together, to unify,” she said about what she hopes to communicate to Tech’s newest graduates. “I’ve been thinking about this so much. We’re so much better off today than we were, but we still have a lot of work to do.”

In 2016, the University established the Potts-Robinson Scholarship, both to honor the pair and to support educational opportunities for minority students attending Tech.

In the mid-60s, the young and trailblazing Bradford-Robinson studied speech and drama at Tech before opening a day care center. A variety of things, including her love for children — “Oh, I love them so,” she said — inspired her to enroll in what is now the Human Ecology program at Tech.

After graduating from Tech, she earned her master’s and education specialist degrees from Northwestern State. She furthered her studies at Ole Miss when she received a fellowship to attend and teach there in 1988-89, then returned to Jonesboro to continue her teaching and administrative career. She also served as an adjunct professor at Tech, where she taught education courses for 14 years.

Meanwhile she was “going through the ranks” in Jackson Parish, she said, first teaching elementary school reading. Then she became a principal and moved from elementary to junior high and then to high school. She completed her career at the central office in Jackson Parish as director of federal programs before her retirement.

Teaching and helping children earn an education was something she knew she had to do, something she discovered a calling and a love for in her day care center after leaving — and before coming back to — Louisiana Tech. For more than half a century, she’s seen up close the difference education can make in individuals and in communities.

“We’re all in this together,” she said. “If we work together, we will be successful and reach our goals.”

Louisiana Tech will honor its Spring and Summer graduates with celebrations held on Sunday, Nov. 22. Occupancy for each of the four events will be within state-mandated gathering limits, and attendees will be required to wear masks or face coverings to the ceremonies.