When mechanical engineer and Grand Challenge Scholar Carli Raupp joined Phillips 66 in Lake Charles this summer, she carried four years of experience collaborating with peers and professors, building prototypes, and performing research to the company. 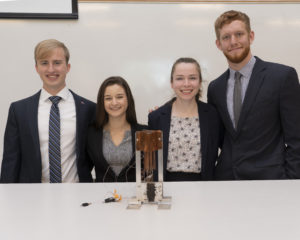 As a Grand Challenge Scholar and a Mechanical Engineering major at Louisiana Tech University, Raupp spent her academic career elbows deep in hands-on and service projects.

She began her journey with Louisiana Tech joining the American Society of Mechanical Engineers, the Association of Catholic Tech Students, and the Freshman Engineering and Science Council her first year on campus. The following year, she joined the sophomore Lambda Sigma honors society. She became Engineering and Science Association treasurer, president, and past president over her time at Louisiana Tech. She served as the vice president of the engineering honor society Tau Beta Pi, a member of Pi Tau Sigma, the Spanish Club, and the Society of Women Engineers. She also served as a College of Engineering and Science Ambassador for two years and played Intramural soccer beginning in her sophomore year.

Adding to her busy schedule, Raupp officially joined the University’s Grand Challenge Scholars Program (GCSP) her sophomore year, selecting an area of focus in personalized learning so that she could learn skills to promote STEM (science, technology, engineering, and mathematics) education and change the world.

Louisiana Tech’s interdisciplinary engineering curriculum provided her with opportunities to complete the five competencies of the GCSP (interdisciplinary, talent, viable business/entrepreneurship, multicultural, and social consciousness) early in her academic career.

By the end of her freshman year, before even hearing about the Grand Challenge Scholars Program at Louisiana Tech, Raupp had completed the interdisciplinary competency of the program by completing an honors political science class. The same year, she also built an Arduino bot, a fish tank, and a prototype that collected litter in public spaces that she and her team presented at the College of Engineering and Science Freshman Design Expo.

“I was surprised by how hands-on the freshman engineering curriculum was. We did a project every quarter with the engineering 120 series, and outside of that, most engineering courses I’ve taken have required reports and collaboration. A mechanical engineering degree from Louisiana Tech is more than just taking tests or sitting through lectures.

“When Dr. [Bryant] Hollins [lecturer of biomedical engineering and former GCSP advisor] introduced the class to GCSP, I could see how I could complete the program through things I was already planning to do. I was also interested in learning more about how to connect what we learned in engineering and the real-world problems that we face. I was also very interested in the K-12 STEM education aspect of the program.”

Raupp’s experiences in the first-year engineering curriculum and grades helped her land a part-time project engineering job with the WestRock paper mill in Hodge, Louisiana. Her ability to collaborate and maintain a busy schedule and her hard work earned her two summer internships with the company.

During her sophomore year, Raupp began focusing on completing the remaining four competencies of the Grand Challenge Scholars Program.

She completed the business/entrepreneurship competency by presenting AutomAbility, a remote control toy car that allows children with limited muscle function to operate a toy with their eyes in the 2019 Top Dog Idea Pitch competition with her project partner, McKenna Barker (biomedical engineering).

She also became immersed in thermoelectrics research with Dr. Arden Moore, associate professor of mechanical engineering, and The Multiscale Energy Transport and Materials Laboratory at Louisiana Tech, putting in more than 100 hours of research over her senior year. In addition to satisfying the GCSP talent requirement, Raupp credits the research with helping her stay focused in classes.

“I think every student, whether they’re in the GCSP or not, should look into the opportunities for research around the College of Engineering and Science. The problem solving involved in the research helped me connect cause and effect and figure out why things do what they do outside the lab. Dr. Moore is one of the best people you can learn from. I joined the lab because my focus area in the GCSP was STEM (science, technology, engineering, and mathematics) education. Still, I feel like I retained so much information this year because of it. I wish I would have done more research sooner.”

To round out her Grand Challenge Scholars Program project, Raupp completed her favorite aspect of the program: the multicultural competency, researching STEM education in different cultures by tapping into a network of pen pals she’d made the summer before she started college. She reached out to a friend in Sri Lankan textile engineering. Raupp learned that the education her friend got was very similar to what she’d received in the U.S. Raupp also learned about how the Sri Lankan educational system is working to integrate STEM into elementary and secondary education.

After putting the finishing touches on her time at Tech, completing the Grand Challenge Scholars Program, and presenting a final project at the 2021 Senior Projects Conference, what advice does Raupp have for incoming College of Engineering and Science students?

“Get involved with anything that’s possible. I’ve met a lot of my best friends through these organizations. You meet some really incredible people that make college go a lot easier. They’re your study partners – your friends. I’ll miss the friends I’ve made at Louisiana Tech the most. We’ve been through a lot together; we’ve done so many projects together. Also, my participation in organizations showed employers that I was able to collaborate.

“I’m very grateful for the professors and how willing they have been to help out with anything I needed and how much they care about their students succeeding. I can’t thank them enough. They’re definitely the reason that I am where I’m at.”