Twenty-two students from Louisiana Tech University’s College of Engineering and Science will return to Houston on April 16 to participate in the 2011 Shell Eco Marathon. Louisiana Tech has entered three cars in this year’s competition and will compete against teams from around the country including Purdue, Penn State, UCLA, the University of California at Berkeley, and the University of Houston.  In addition to the U.S. teams, competitors from Canada, Mexico and Brazil will also be in the field. 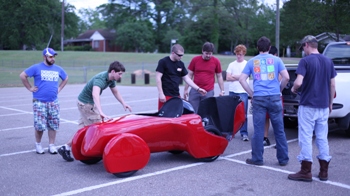 According to team officials, two of Louisiana Tech’s cars are completely new designs, with one being a new urban car weighing in at less than 200 pounds.  These cars are being developed for a single challenge: to travel as far as possible on the least amount of fuel and to put the fuel efficiency of the vehicles to the ultimate test. Last year, the Louisiana Tech team placed first in design, first in team spirit, second in urban car concept and tenth in the combustible fuels category.  The students, who come from many different academic degree programs, participate in the project as volunteers and do not receive any class credit.  They design, build, paint and test the cars on their own time, usually in the evenings, after class and on weekends.  They also assist with fundraising and publicity. While employing skills they learn in the classroom, these students are also developing leadership and project management skills that will serve them throughout their careers. “We are excited to compete in the upcoming eco-marathon,” said Dr. Heath Tims, assistant professor of mechanical engineering and one of the team’s faculty advisors.  “With a new urban car design, our previous urban car (winner of last year’s design award), and a new prototype car, we will showcase the caliber of work that has become the standard for our team.” Tims also serves on the event’s national steering committee.  This year’s event will again be held in downtown Houston where teams will race on a track built around the city’s Discovery Green.  Cash prizes are awarded for eco design, safety, technical innovation and best team spirit. Louisiana Tech’s College of Engineering and Science is a nationally recognized leader in educational innovation whose goal is to become “the best college in the world at integrating engineering and science in education and research.”