Computer science students from Louisiana Tech University’s College of Engineering and Science are being afforded a unique opportunity to experience the challenges of cyberspace security first-hand as they prepare for the 2011 “Cyber Storm” competition, May 6 on the Louisiana Tech campus. The day-long cyber security “hackfest” will pit two teams, “Red Cell” and “Blue Cell,” against each other in a battle to defend their own computer network, while at the same time, attempting to attack the network of the opposing team.  Various tasks and challenges scattered throughout the competition will be given by the administrative team, known as “White Cell,” to further challenge the teams. White Cell will also attempt to confuse and disrupt Red Cell and Blue Cell by attempting to infiltrate their networks. 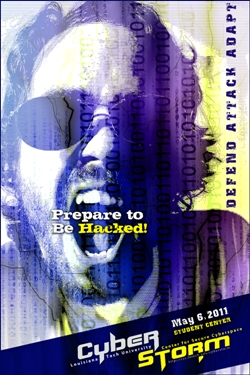 Admission to the event is free and the public is invited to attend. “Fundamentally, this is a competition involving the students from the cyber security course that is designed to test their design and setup of a network with systems of various operating systems, services and security settings,” said Dr. Jean Gourd, assistant professor of computer science at Louisiana Tech.  “During the competition, however, we’ll introduce challenges to spice things up.  For example, we plan to have a challenge that drives home the importance of security (or lack thereof) in our supervisory control systems, which are those that control our infrastructure such as electrical power plants and water treatment plants.  The Cyber Storm competition serves as the final exam for students in Louisiana Tech’s 400-level Cyber Security course.  The course uses hands-on, applications-based approaches to raise awareness of the security issues encountered in cyberspace.  Students learn how to setup networks, defend them and adapt to cyber threats as they occur. “We are only as strong as our weakest link,” Gourd said.  “For example, you might not think that it’s important to secure your laptop, but not doing so may actually negatively impact others.  We want to come up with innovative ways to address cyber security in an attempt to be one step ahead of the attackers.  The Cyber Storm, although fun and the final exam for the cyber security class, is really designed to raise awareness about this fact.” Students enrolled in the computer science program’s Senior Capstone course will also play an important role in the competition, having been tasked with developing the infrastructure that will enable this year’s competition.  In addition to hardware and network configuration, they are further designing and implementing a number of critical components that will provide challenges and overall situational awareness during the Cyber Storm. This year’s Cyber Storm will feature live scoring and messaging, real-time network statistics, real-time visualization of network attacks, “King of the Hill” servers, cyber security related challenges, cryptography and steganography challenges, wireless network access challenges, physical security and social engineering “traps.” Gourd believes that as our dependency on cyberspace commerce and communications increases, primarily the Internet, cyber security will become more crucial.  “Ultimately, attackers are after our data and our computational power, so they either want to steal our credit card numbers or our CPU cycles.  These things can be used to steal our identity, steal our money and steal our processing power for things such as sending spam.  And then they sell that to others and make billions.”