Researchers from Louisiana Tech University will be floating high above the Gulf of Mexico this month to conduct zero-gravity testing of an experimental DNA analysis instrument developed at Tech that could benefit future NASA astronauts. Dr. Niel Crews, assistant professor of mechanical engineering, and Collin Tranter, a graduate student with the Institute for Micromanufacturing (IfM) say the instrument could be used to monitor the health of astronauts exposed to cosmic radiation beyond Earth’s protective atmosphere. 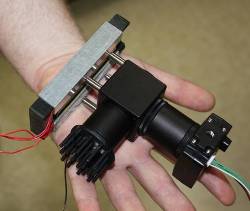 “Our goal is to understand how the system behaves under conditions similar to actual deployment in space missions,” said Crews.  The Louisiana Tech-developed devices are beneficial to NASA because they are small, consume less power and require little to no human operation. The Louisiana Tech researchers will subject themselves to extreme conditions in order to conduct sensitive testing of the miniature device.  NASA has used these same flights to train their astronauts. The instrument attracted the attention of NASA scientists for possible use on the International Space Station, during inter-planetary travel and even for unmanned missions to search for life within the Solar System.  “We hope that by working with NASA, one of our DNA analysis devices will be sent into orbit to study the effects of space environments on living things, first studying DNA then cells,” said Tranter.  “Some further testing has to occur first, such as making sure the device works properly in low-gravity conditions.  This will be done on a parabolic aircraft flight hopefully before the end of the year.” The tests will take place on a NASA airplane operating out of Ellington Field at Johnson Space Center in Houston.  The flight pattern will consist of forty steep dives and climbs over the Gulf of Mexico.  A controlled dive of nearly 10,000 feet in less than one minute will result in approximately 20 seconds of weightlessness for the researchers and the payload onboard.  An abrupt climb back to the starting altitude will create a gravitational force twice the normal amount. Even Hollywood has gotten into the act, using these flights to depict weightlessness on the silver screen.  All of the zero-gravity scenes in the movie Apollo 13 were filmed during these flights.  The alternation between zero gravity and 2G forces can so disorienting that NASA astronauts call the aircraft the “vomit comet.” NASA recently selected this system for a week-long series of flights as part of their Facilitated Access to the Space Environment for Technology (FAST) program, which focuses on expanding new technologies to be used in space flight applications. Tranter is pursuing a Ph.D. in Nanosystems Engineering at Louisiana Tech and will continue to work with Crews on the project.  He says they hope to learn very soon if their device can stand up to space environments. “Low gravity can cause all kinds of unpredictable problems,” Tranter said.  “Eventually, I hope our system can reveal more about space radiation effects on DNA and cells, leading to options for safe space travel and exploration by humans.  Our lab has studied some effects of radiation on DNA, such as UV exposure, but nothing on Earth compares to the environments we hope to study outside of the Earth’s atmosphere.” Written by Catherine Fraser – cfraser@latech.edu