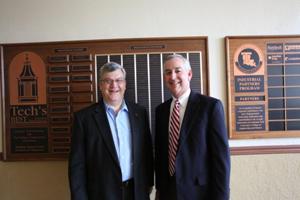 “Louisiana Tech’s College of Engineering and Science is already regarded as a national leader in engineering and science education because of its integrated and projects-based approach,” said Napper.  “Unfortunately, our facilities have not kept up with our academic reputation.  This building will provide new active learning space for first and second year engineering and science students, for the first time since Bogard Hall was opened in 1940.” Napper says the modern facility will also serve as an excellent recruiting tool for the College, especially in East Texas where many high schools have outstanding facilities and where many of Louisiana Tech’s peer institutions have recently built new facilities. The new three-story building will be located in the new Enterprise Park, adjacent to Bogard Hall, and will feature new active learning class labs, shops and meeting rooms for engineering, math and science classes.  The funds to construct the building will be raised primarily from alumni and corporate friends of the College. Jay Guillot, vice president for Hunt, Guillot and Associates and a graduate of Louisiana Tech, says the firm shares Dean Napper’s belief that this building is critical to future success. “Louisiana Tech continues to be innovative in adapting their engineering teaching methods to the needs of the changing marketplace,” said Guillot.  “This has been of great benefit to our firm as we have over 40 of their graduates on our staff.   We consider our partnership with Louisiana Tech to be an integral part of our success and are pleased we can make this contribution to their future.” The campaign launch event at Squire Creek will include dinner, a live jazz trio featuring Lawrence Gibbs and both a silent and live auction.  Items to be auctioned include a football autographed by Terry Bradshaw, a basketball signed by Karl Malone, vacation getaways to locations such as Hawaii and the Alabama Gulf coast, and original works of art.  Louisiana Tech’s Former Vice President for Academic Affairs, Dr. Virgil Orr, crafted a Louisiana Tech bulldog out of stained glass for the auction and Vice President Les Guice is offering to cook gumbo for four people.  Tickets to the event are $25 per person and may be purchased by calling (318) 257-4971 or visiting www.latech.edu/coes for more information. Written by Catherine Fraser – cfraser@latech.edu