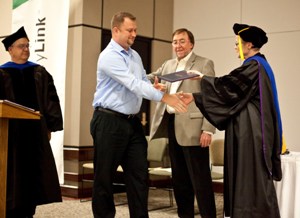 Program courses include Telecommunication Theory and Application, Modern Wireless and Optical Networking, Optical Communications Systems, Introduction to Information Assurance, Network Design and Implementation. CenturyLink CEO and President Glen Post was on hand to offer his congratulations to the graduates along with program professors and university administrators.  Dr. Stan Napper, dean of Louisiana Tech’sCollegeofEngineeringand Science, and Dr. Terry McConathy, executive vice president and dean of theGraduateSchoolat Tech, presented the students with their certificates. Napper says the graduate certificate in Communications Systems was created to meet the workforce development and training needs of CenturyLink.  “Demand has increased significantly subsequent to CenturyLink’s acquisition of and merger with Embarq in 2009, and is expected to increase further with their acquisition of Qwest in 2011.” The Graduate Certificate in Communications Systems program is currently offered in the evenings at CenturyLink headquarters inMonroein order to serve full-time employees.  The class presentationsare captured and posted for students’ use after the class or in case their work schedule requires them to miss class. The class capture technology also enables the class to be taken by students in other locations. Students who complete the program may consider pursuing an MBA offered by the College of Business at Louisiana Tech, or an M.S. in Engineering and Technology and Management or M.S. in Engineering offered by the College of Engineering and Science at Louisiana Tech, depending on the student’s undergraduate background and career goals.