All week, excitement has been building internationally as physicists prepared to present the latest results in their hunt for the Higgs particle which is the key to answering the question: Why does matter have mass? Early this morning, scientists from around the globe, including nearly 30 Louisiana Tech students, faculty and family members who gathered at 2:00 a.m. on the Tech campus, watched the live webcast from CERN, the European Organization for Nuclear Research, as it was announced that they have observed a new particle. Not only did the observers from Louisiana Tech celebrate the announcement, but many of them had an active role in its search and discovery. 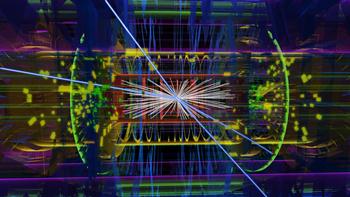 Graphic depiction of a Higgs decaying into four particles called muons, which are heavy cousins of the electron - Courtesy of CERN

“Louisiana Tech’s part in today’s discovery is substantial,” said Dr. Lee Sawyer, professor and chair of the physics department at Louisiana Tech.  “We have worked in a number of areas on the ATLAS experiment, including verifying the quality of the data collected for the experiment and designing and maintaining the software that selects the collision events to record.  Members of our group, namely Dr. Z.D. Greenwood and Dr. Catrin Bernius, are part of the Higgs search team and have been specifically looking for electrically charged versions of the Higgs particle. “This discovery is a momentous occasion, not just for particle physics but for all of science.  It is the culmination of over 30 years of work at a number of laboratories around the world.” ATLAS is a particle physics experiment at the Large Hadron Collider at CERN that seeks to learn about the basic forces that have shaped the Universe since the beginning of time and that will determine its fate.  Among the possible unknowns are the origin of mass, extra dimensions of space, unification of fundamental forces, and evidence for dark matter candidates in the Universe. The full Louisiana Tech team includes Sawyer, Greenwood and Physics Professor Dr. Markus Wobsich, as well as postdoctoral researchers Dr. Matthew Tamsett and Dr. Catrin Bernius, graduate students Ram Dhullipudi, Arirvan Sircar, Rajiv Subramaniam, Alex Johnson, Khadeejah Alghadeer, and David Palma, and undergraduate student Andrew Touchet. Sawyer and Wobisch have been collaborating professors for Fermilab for the last several years.  Their analyses were recently featured on the Result of the Week section of the Fermilab website.  The section focused on the running of the strong force or what occurs when a strong force loses strength at short distances. Sawyer says he was working on the experiment in Geneva, Switzerland at the time the initial results were verified.  “I was on shift for the final data used in the discovery, and I was part of the team that determined the quality of the data to be used in these searches.  I was also at CERN last week when the results were being finalized for presentation within our experiment. “The realization that we had finally arrived at a definite discovery was very emotional for me. It was like being a witness to Einstein writing down “E=m c2” or pulling back the control rods in Fermi’s first nuclear reactor.” Greenwood agrees.  “Those of us on the ATLAS experiment and on our competing experiment, CMS, have independently discovered a new particle.  This particle may be the long sought-after Higgs boson that was predicted by the Standard Model many years ago.  Or it could be a new particle that is described by some new model beyond the Standard Model of particle physics.  Regardless, it is most likely the most important discovery in physics in the last thirty years and doubtlessly will open the door to new topics of research in our field for decades to come.” Last December, ATLAS scientists announced seeing tantalizing hints of a new particle in their hunt for the Higgs, the missing piece in the Standard Model of particle physics. Since resuming data collection in March, the CMS and ATLAS experiments have more than doubled their collected data.  The statistical significance of the earlier hints has grown and a more complete picture of today’s observations will emerge later this year after the LHC (Large Hadron Collider) provides the experiments with more data. Discovery of the Higgs – or another new particle – would represent only the first step into a new realm of understanding of the world around us.  Theorists’ propose that the universe is permeated by a universal field that gives particles mass. The amount of mass a particle takes on depends on how strongly it interacts with this field, called the Higgs field.  In quantum physics, fields have subatomic particles associated with them, detected or hypothesized. The electromagnetic field has the photon, for instance. The Higgs field is predicted to have the Higgs boson. Without Higgs, the so-called Standard Model of physics is incomplete. The Standard Model describes the properties of the 16 particles – including quarks and electrons – that form the fundamental building blocks of the universe. Fermilab is operated by the Fermi Research Alliance, a joint venture of the University of Chicago, Institute of Technology and the Universities Research Association (URA). Fermilab is a part of the Illinois Technology and Research Corridor and is best known for Tevatron, a landmark particle accelerator 3.9 miles (6.3 km) in circumference.  It is the world’s second largest energy particle accelerator. Written by Catherine Fraser – cfraser@latech.edu