The “Robodogs” from A.E. Phillips Laboratory School at Louisiana Tech University took second place in the robot performance competition at the Louisiana State First Lego League (FLL) tournament recently held in New Orleans. This year’s competition consisted of 58 teams from across the state competed at the state tournament.  For the robot performance competition, each team designs and builds an autonomous robot using LEGO Mindstorms kits that must complete a variety of missions and score as many points as possible in a two and a half minute competition round. The A.E. Phillips Robodogs also received the Gracious Professionalism award which recognizes the team whose members show each other and other teams respect at all times. The term “Gracious Professionalism” was coined by Dr. Woodie Flowers, a co-founder of FLL and Louisiana Tech University mechanical engineering alumnus.  According to the FLL, Gracious Professionals, “learn and compete like crazy, but treat one another with respect and kindness in the process.” 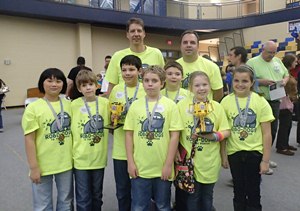 In FLL, children are immersed in real-world science and technology challenges. Each year’s challenge is tied to a relevant engineering and science theme. This year’s challenge is “Senior Solutions” and teams were tasked with identifying and learning about problems faced by senior citizens.  As part of the challenge, teams research and design their own solution to the problem and build an autonomous LEGO robot that performs a series of missions that tie in with the challenge theme. Through their participation, children develop valuable life skills and discover exciting career possibilities while learning that they can make a positive contribution to society. Written by Catherine Fraser – cfraser@latech.edu