Dr. Lee Sawyer, the Charles and Newellyn Spreull Professor of Physics at Louisiana Tech University, and NASA are predicting that an asteroid, measuring approximately 150 feet in diameter and weighing approximately 130,000 metric tons, will fly closer to Earth Friday than any object of its size ever has before. Asteroid 2012-DA14 will pass within 17,200 miles of the Earth’s surface, which is closer than the orbit of most weather and communications satellites and is about one-tenth the distance between the Earth and the Moon. However, Sawyer says we have nothing to fear. “Astronomers have been tracking this asteroid since it was discovered in February of last year,” said Sawyer.  “Although this is a record close approach for an object this size, the orbit is now well known, and there is no chance of a collision.” 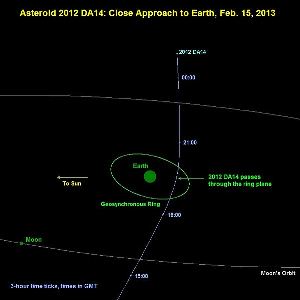 Sawyer says the typical communication satellite orbits at around 22,000 miles, so by comparison, this asteroid will pass extremely close to the Earth. The asteroid will be visible – with a little help from a telescope – in eastern Europe, Australia and Asia.  Those who are able to see it will see something similar to a star, moving slowly against the background stars. “The asteroid will pass so close to the Earth that it will actually change its orbit significantly.  There will be another close approach in 2046, but it will not be as close the one this month.” By celestial standards, Asteroid 2012-DA14’s size is relatively small.  Nevertheless, if it were to hit the Earth, the impact would be roughly equivalent to a 2.4 megaton bomb – enough to flatten a large area, but wouldn’t be globally catastrophic. NASA estimates a smallish asteroid flies close to the Earth every 40 years, on average, but only hits the Earth once every 1,200 years.  Nevertheless, they are still keeping a careful watch on this one. Sawyer earned a Ph.D. in experimental particle physics at Florida State University in 1991 and joined the physics faculty at Louisiana Tech in 1997.  He has played an active role in the development of detectors for high energy physics experiments, the design of software for large detector systems, and distributed computing systems. As a graduate student at CERN during the time the World Wide Web was first developed there, Sawyer setup one of the first academic web servers in the United States in 1992. He was inducted into Sigma Pi Sigma as an undergraduate physics major at Northeast Louisiana University (now the University of Louisiana – Monroe) and has previously served on the Sigma Pi Sigma national council. Written by Catherine Fraser – cfraser@latech.edu