Ever seen a MOM (Mechanically Operated Mother)?  How about a Parking Space Locator that can keep you from wandering around packed parking lots looking for your vehicle?

Or how about a Crosswalk Lighting System designed to make crossing busy streets safer for pedestrians?

Most people might never have seen such oddities, but freshman engineering students at Louisiana Tech University have. 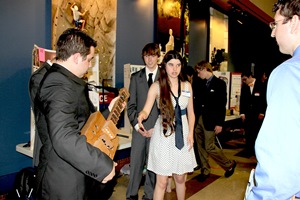 Louisiana Tech’s College of Engineering and Science recently held its 2013 Freshman Design Expo, the culmination of a year-long, project-based learning experience during which students use an Arduino microcontroller to build a device that could eventually be patented and marketed.  The Arduino is a tool for making computers that can sense and control more of the physical world than your desktop computer.

“This project culminates our freshmen engineering sequence of courses,” said Jane Petrus, student success specialist for the College of Engineering and Science. “The entire sequence exposes students to the many fields of engineering, such as electrical, industrial, mechanical, and chemical, through a variety of hands on projects.”

The Freshman Design Expo is part of the Engineering 122 course and counts for 20 percent of the students’ final grade.  Students are challenged to think of something that ‘bugs’ them and work in a team to solve the problem.

“This generation of student thrives on hands on projects, and this specific project gives them freedom to pursue an area they find interesting.  Some students love the outdoors, so their project may involve hunting or camping.  Some students don’t like to wake up early in the morning, so they are creative in designing an alarm clock that will wake them for their 8 a.m. class.  This project was started to encourage engineers to think outside the box and be creative and innovative, something most people don’t associate with engineering.”

Petrus said a record number of students participated in this year’s event.

“We have a record number of participants this year at 59 teams, ranging from two to four students each.  The faculty members are also very involved and have spent time in class assisting the students with troubleshooting and fabrication.  We also involve a huge panel of judges. The judges consist of upper classmen (junior and senior engineering students), Tech faculty (both current and retired), industry professionals, and community leaders.  Dr. David Hall is the coordinator of the event and spent countless hours making sure everything was ready.”

Haylee Thornhill, Ronnie Huckaby, Morgan Bolich and Walker Thurmon took first place for their “Fire Safe” project, which detects when a homeowner leaves a home and shuts off power to selected appliances to prevent potential fires and also powers the appliances back up when it detects a resident’s return.

“We just started brainstorming and running through ideas and when we came up with this one we knew it had good potential,” Huckaby said. “We just took it and ran with it.”

“We knew if we could get it working it would be great, but the question was would it work?” he said.  “We really just finished it and got it working a few days ago. It was down to the wire, but it all worked out.”

Second place went to Evan McDougall and Taylor Vancoevering for their “Perfect Pop” project, which uses a smart device inserted into a microwave oven and uses a sound sensor to detect when a bag of microwave is fully cooked, preventing overcooking.

Winning the Patent Pending Award were Warren Clardy, LeDarious Jones, Isaiah Kelly and Adam Parker for their project “Duty Calls,” designed to clean public toilets before each use.  Taking the Shoot The Moon Award, for a good project that might not be completely functional, Drew Theriot and Travis Moore for their project “Multipurpose Laptop Sleeve,” which protects laptop computers in a backpack while also preventing it from overheating while charging.

Macey Sutherland and Neesha Siriwardane took the Can Do Award for their project “Pulse Oximeter Glove.”  The Can Do Award is for a difficult project that actually worked and their project monitored blood oxygen content during endurance sports, providing athletes with vital information on how their bodies are reacting to the strain of competing.

The Da Vinci Award, given to the most creative and out of the box thinking, went to Drew Horn, Ryan McGuire and Dakota Morgan for their project, “Operation Chicken Coop,” which used a sequence of pipes and belts to make a stress-free environment to acquire eggs from a chicken coop with a sensor counting the number of eggs produced.

Justin Coe, Dalton Johnson, Hayden Migliore and Kelsey Phelan took the Rolex Award for best-constructed prototype for their “Laser Guitar,” a training instrument with a thinner and shorter neck and “strings” made up of lasers and photoresistors.

“I thought the expo went great and we had a record number of projects,” Hall said.  “There were a lot of great projects with many coming up in the discussion for awards and a number that could be patented.  Every year these Arduino sensors get less expensive, and when you pair them with a microcontroller, you can do some pretty amazing things as these projects show.” Written by T. Scott Boatright – boat@latech.edu