Twenty-three year old Louisiana Tech engineering graduate Cody Parsley knew he would go places and was always interested in living abroad after graduation, but he had no idea just how far from Ruston his Tech degree would take him.

Parsley, who graduated from Louisiana Tech in 2012 with a degree in mechanical engineering, is now living and working in Stavanger, Norway as an engineer for the T. D. Williamson Company. 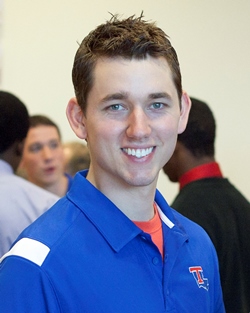 “In the spring of 2012, I knew nothing about T.D. Williamson before going to the fall career fair at Louisiana Tech during my senior year,” said Parsley.  “During the career fair, the employee I spoke to was in a rotational leadership training program that sounded interesting to me, so I interviewed with the company and got a job offer.”

In addition to his offer from T.D. Williamson, Parsley also received six other job offers but says he chose T.D. Williamson because he has always been interested in working in a different culture.  He said the five weeks of paid vacation also helped convince him to move.  Parsley said he will live and work in Norway for about two years, and then could be transferred back to the United States or to another country.  The company’s offshore Center of Excellence is located in Houston, which could be an option and where Parsley has family.

“Due to the rotational nature of the leadership training program, it’s possible that I could come to Houston for a short period of 6-12 months and then expat again to either Australia or Brazil for a couple more years before ending up again in Houston,” Parsley said.

One thing that Parsley says has been a real surprise to him has been the weather in Norway, where it can be sunny, cloudy, rainy and snowy all in one day.  He is also fascinated by the work environment in the country.

“A minimum of 22 days of vacation is mandated by law in Norway and if you work over 37.5 hours a week, 150 percent overtime pay or comp time is given,” says Parsley.  “The nonhierarchical employment structure in companies here in Norway is also very different from companies in the U.S.”

Parsley said he is proud of his degree from Louisiana Tech and feels it’s important to maintain pride in and support of the university, and has already begun giving back to his alma mater.

“There’s just too much to say about life after getting an engineering degree from Louisiana Tech.” Written by Catherine Fraser – cfraser@latech.edu