Louisiana Tech University’s College of Engineering and Science has received a generous gift of over $200,000 from Hunt, Guillot and Associates (HGA) of Ruston, La. and members of the Jack Canterbury family, to support construction of the College’s new engineering and science education building.

The gift will support one of the sophomore lab spaces and two student collaboration rooms inside the proposed Integrated Engineering and Science Building.  The new facility will support not only academic needs, but will also serve as a recruiting tool for the program, helping to further cement Louisiana Tech’s reputation as a national leader in engineering and science education. 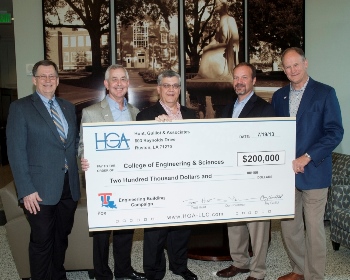 Today, many of the engineers currently employed HGA were students of Canterbury.  “I had a great respect for him as a professor and as an engineer,” says Tim Doughty, HGA mechanical engineer.  “Dr. Canterbury had a special way of preparing his students for the engineering workplace.  His class was challenging, but very rewarding, and provided life-lessons I still use today.”

Dr. Stan Napper, former dean of the College of Engineering and Science and current Louisiana Tech vice president for research and development, says he is grateful for the continuing relationship between Louisiana Tech and HGA.

“We are pleased to simultaneously recognize the previous generations of Tech leaders, the current generation, and the future generations who will learn together in this new building,” said Napper.

The two collaboration spaces within the new engineering and science facility will also be named in honor of two of HGA’s senior executives, Jay Guillot and Don Plummer.

Louisiana Tech has been a tremendous part of the Guillot family for three generations. Their Louisiana Tech tradition began in 1944 when Jay Guillot’s mother graduated with her bachelor’s degree.  Jay Guillot later attended Tech and earned both his bachelor’s and master’s degrees in civil engineering. Also calling Louisiana Tech their alma mater are Jay’s wife, Susan, and two of their daughters.

Guillot’s involvement with the university has extended far beyond his graduation.  He has served as an adjunct faculty member in the College of Engineering and Science, chaired the civil engineering advisory board, served on the Engineering and Science Foundation Board, and has played an integral part in the development of Enterprise Campus’ master plan.

“Louisiana Tech has been a large part of my family for many years and has provided us a great foundation for growth and success,” said Guillot.  “It is also integral to HGA’s success, as we have many Louisiana Tech grads on our staff.  We are pleased to make this contribution as a way of giving back and investing in the future successes of a great institution.”

Echoing similar sentiments, Plummer graduated from Louisiana Tech in 1985 with a degree in civil engineering.  Both of his daughters followed him as Louisiana Tech grads, but opted for different degree programs. While a collegian, Plummer was a member of American Society of Civil Engineers and has maintained an active membership with the organization.

For the past 12 years, Plummer has helped lead HGA, serving as executive vice president.  He holds professional engineering licenses in nine states and also holds an environmental engineering license in the state of Louisiana. A long-time contributor to Louisiana Tech’s educational and athletic pursuits, Plummer’s commitment is not slowing down.

“It comes with great pleasure to continue the support of my alma mater that has provided me with the education that became the foundation of my career,” Plummer said.

The Integrated Engineering and Science Building campaign is in its final months with just $2.5 million remaining to be raised to meet the goal.  The College hopes to raise a total of $7.5 million in private support, with the state of Louisiana matching that amount for a total of $15 million.

To learn more about the campaign, visit http://coes.latech.edu/building. Written by Catherine Fraser – cfraser@latech.edu