Dr. Yuri Lvov, professor of chemistry and T. Pipes Eminent Endowed Chair in Micro and Nanosystems at Louisiana Tech University, has been named a 2014 Fellow of the National Academy of Inventors (NAI). Lvov is one of only two academic inventors from Louisiana institutions to earn the NAI’s Fellow distinction for 2014. Election to NAI Fellow status is a high professional designation accorded to academic inventors who have demonstrated a prolific spirit of innovation in creating or facilitating outstanding inventions that have made a tangible impact on quality of life, economic development, and the welfare of society. 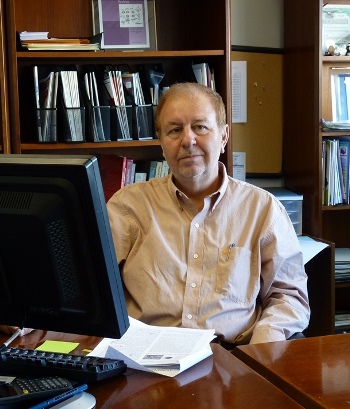 Lvov’s groundbreaking work in nanomaterials, including nanoassembly of ultrathin films, bio and nanocomposites, ordered nanoshells, organic-inorganic composites and clay nanotubes with controlled release of chemical agents, has earned him international acclaim and recognition. “I am very happy to be just the second Louisiana professor elected to this prestigious national academy,” said Lvov. “The academy selection committee consists from the world top scientists and innovators, and to be screened by them means a higher visibility for Louisiana Tech University. This is recognition not only for my research, but for all Louisiana Tech efforts in innovative science and engineering technologies.” Lvov is among the pioneers of polyelectrolyte layer-by-layer assembly – a nanotechnology method which has resulted in a number of industrial applications. His research on composites with clay nanotubes allowed for anticorrosion, antimicrobial and anti-aging fictionalization of polymers. Lvov has 12 U.S., Australian and Japanese patents, and has published 220 papers which were cited 13,200 times. In 2007, Small Times magazine named Lvov its Inventor of the Year. Beating out candidates from institutions such as Princeton University and high-tech companies across the nation, Lvov received the Small Times award based on his cancer drug delivery work and innovations in drug reformulation through polyelectrolyte nano-encapsulation. Most recently, Lvov was awarded the prestigious Alexander von Humboldt Prize for lifetime achievements in nanochemistry, by the Alexander von Humboldt Foundation in Germany. The Humboldt Prize is conferred upon internationally-renowned scientists and recognizes those whose fundamental discoveries or insights have had a significant impact on their own discipline and who are expected to continue producing cutting-edge innovations in the future. “Dr. Lvov continues to distinguish himself as a researcher and inventor, and Louisiana Tech as a nationally-prominent research university,” said Louisiana Tech President Les Guice. “The contributions he has made to his field have been remarkable and as important as the impacts he has made on his students and his fellow research faculty. “I congratulate Dr. Lvov on being named a NAI Fellow and couldn’t be more pleased that he is part of our university and our community.” A total of 170 Fellows from the nation’s most prestigious research institutions were elected by the NAI’s Selection Committee, which includes NAI Fellows, recipients of U.S. National Medals, National Inventors Hall of Fame inductees, National Academies members and senior officials from the U.S. Patent and Trademark Office, Association of American Universities, American Association for the Advancement of Science, Association of University Technology Managers and National Inventors Hall of Fame. “Dr. Lvov demonstrates the three-fold mission of Louisiana Tech through his impact on undergraduate and graduate education, basic research that addresses important global challenges and innovations that lead to usable technology,” said Dr. Stan Napper, vice president for research and development at Louisiana Tech. “In addition to Dr. Lvov’s past international awards for his scientific research, this recognition from the National Academy of Inventors confirms his willingness and ingenuity in applying nanotechnology to patentable and commercially viable inventions.” The NAI Fellows will be inducted on March 20, 2015, as part of the 4th Annual Conference of the National Academy of Inventors at the California Institute of Technology in Pasadena, California. Fellows will be presented with a special trophy, newly designed medal and rosette pin in honor of their outstanding accomplishments. With the 2014 class, NAI Fellows now total 414 and represent more than 150 prestigious research universities and governmental and non-profit research institutions. The academic inventors and innovators elected to the rank of NAI Fellow are named inventors on U.S. patents and were nominated by their peers for outstanding contributions to innovation in areas such as patents and licensing, innovative discovery and technology, significant impact on society, and support and enhancement of innovation. “Louisiana Tech will be more visible and will have the capacity to influence national innovation,” Lvov said of his recognition. “Eventually, all of this will improve our chances for research funding and intellectual property licensing.”