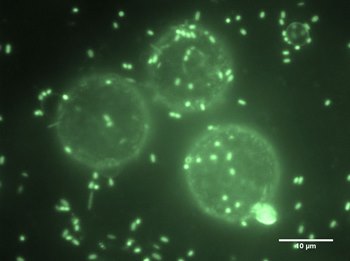 Bacteria (green dots) attach to and surround oil droplets (spherical objects) in the essential first step in the bacterial oil decomposition process that can be ecologically improved through the use of halloysite nanotubes developed at Louisiana Tech.

Minullina and Panchal’s poster titled, “Oil spill remediation through halloysite Pickering emulsification with enhanced bacterial decomposition” was selected from more than 230 presented posters at the polymeric composites section of the meeting.  The poster won out over a general field of competition with teams representing institutions from around the world including China, Japan, Germany, United Kingdom and France. “To be recognized among hundreds of other posters at the national meeting is a big deal for us,” said Minullina. “It indicates that we work on the hot problem which requires immediate solution.”  Panchal adds, “The poster award means that our research is getting appreciated on the national level and that the work we are doing is needed by this country. This motivates us to work more intensively on providing an elegant and efficient solution to the problem of oil spill remediation.” Minullina and Panchal’s award-winning poster, which was developed as part of a team led by Dr. Yuri Lvov, professor of chemistry and nanosystems engineering in Louisiana Tech’s College of Engineering and Science and Institute for Micromanufacturing, is devoted to the group’s research on the bio-decomposition of spill oil using nanoclay emulsifiers rather than environmentally harmful detergents. “At Louisiana Tech, we are developing environmentally friendly alternative methods of oil emulsification based on halloysite clay nanotubes, synergistically combining better emulsification and enhanced bio-decomposition based on loading these nanotubes with ‘taste enhancers’ for bacteria,” says Lvov.  “As a result of our work, we recently received funding from the Gulf of Mexico Research Program (together with Tulane University) based on our pioneering usage of the clay nanotubes as tiny containers for loading and sustained release of chemical inhibitors, and bioactive compounds including proteins, DNA and drugs.” The explosion on the Deepwater Horizon oil well drilling platform in April 2010 resulted in the largest marine oil spill in United States history, releasing millions of barrels of oil into the Gulf of Mexico.  To prevent the spreading of the oil to coastal areas and to restrict it underwater, a surfactant called Corexit was applied from airplanes.  Approximately 1.8 million gallons of this surfactant was used, however, its toxic effect on marine life and oil-degrading bacteria was later discovered. Lvov says that halloysite was pioneered at Louisiana Tech and, contrary to the more common carbon nanotubes, is biocompatible and available in mass quantities.  Since the introduction of halloysite for composite materials in 2002, Lvov’s research group has published 57 papers on the clay nanotubes making Louisiana Tech the world leader in this promising “green” natural nanomaterial. “In the future, I hope that our efforts will lead to the employment of a unique material like halloysite clay nanotubes in an efficient, economical and most important, eco-friendly technology to combat oil spills,” Panchal said. Minullina agrees and hopes one day the approach of using natural environmentally-friendly nanomaterials such as halloysite nanotubes she and her colleagues are developing at Louisiana Tech will be widely used in the field to fight oil spills and help microorganisms degrade oil more efficiently.