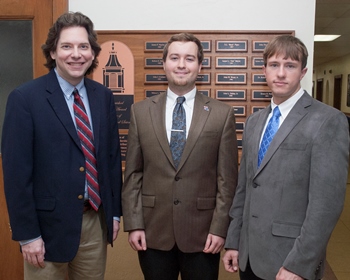 McDougall notes the importance of collaboration and mastery of multiple disciplines in the success of the project. “Dustin and I received a great deal of advice on improving our presentation from Dr. (James) Palmer, our fellow chemical engineering seniors and my technical presentations teacher, Christine Strebeck,” McDougall said. “In the last four years, we have had countless presentations and team projects.  I am grateful that our curriculum requires such an intense, comprehensive study of numerical techniques, which feedback from the audience suggested was one of our greatest strengths.” Savage says that the hands-on focus of the Louisiana Tech engineering curricula helped prepare the team for performing the research and presenting it. “Louisiana Tech’s heavy emphasis on communication and teamwork displayed throughout our curriculum also allowed Evan and me to deliver the winning presentation at the recent AIChE Conference,” Savage noted. “We have worked together on projects in the past and used our familiarity to graft our individual strengths into the alkylation design. From presenting on basic freshman engineering designs to more complex topics in our junior and senior classes, we were fully prepared to represent Tech in Houston.” Competing teams worked on their project for most of the academic year, while the Louisiana Tech team had only three months. Palmer, Louisiana Tech’s AIChE faculty sponsor and director of biomedical engineering and chemical engineering, said that this event highlights the success of the chemical engineering program at Louisiana Tech and the opportunities for Louisiana Tech chemical engineering students. “Attracting outstanding students such as Evan and Dustin, and providing them an effective learning environment are critical factors that make Louisiana Tech University such a quality institution,” Palmer said. “We are pleased to have them represent the institution and are proud of what they have achieved.” In addition to winning the competition, Savage and McDougall are both members of Omega Chi Epsilon, and gave presentations on behalf of organization for Louisiana Tech’s 69th Engineering and Science day on April 11, before leaving to compete in the 2016 Best Senior Design Competition. This event was AIChE’s third national design competition. Louisiana Tech also won first place two years ago. The AIChE is the world’s leading organization for chemical engineering professionals. The AIChE Spring Meeting is the annual technical conference for practicing chemical engineers and addresses a wide range of subjects relevant to the current needs of industry. Written by Brandy McKnight – mcknight@latech.edu