The Louisiana Tech University Aerospace Engineering Club recently launched Harley II, the second in a series of high-altitude weather balloons launched by the club, which reached a height of approximately 22 miles and had a flight time of 3 hours and 43 minutes. The club launched Harley II from Joe Aillet Stadium, along with a plastic Louisiana Tech Bulldog, with the mission of capturing imagery for the university. The experiment captured more than 20 gigabytes of photos and video. 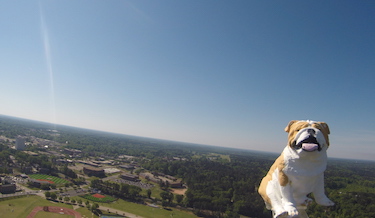 Harley II and its Bulldog payload ascents over the Louisiana Tech campus.

In addition to capturing images and video, the launch was a key step forward in the overall series mission to attract the attention of the United States National Aeronautics and Space Administration (NASA) and other potential aerospace industry employers. Payloads like the one launched on Harley II serve as a test bench for developing a scientific miniature satellite, or CubeSat, payload at Louisiana Tech. John Aguillard, president of the club and sophomore electrical engineering student, says that the club’s goal is to build a reputation in aerospace engineering at Louisiana Tech. “Our goal is to promote the College of Engineering and Science’s ability to tackle high-risk aerospace engineering challenges,” Aguillard said. “As no university in Louisiana currently offers an Aerospace Engineering major, we aim to make our program the obvious choice for prospective students. With our work, we hope to give the University a respected name in the field.” Mr. T. J. Spence, instructor of electrical engineering at Louisiana Tech and faculty advisor for the organization, adds that the students’ ownership of the balloon project from budget development and fundraising to building the balloon and payload prepares students for large projects in industry. “With the high-altitude balloon projects, the stakes are much higher than the students are used to, as the failure of a mission could lead to the loss of thousands of dollars of money, which they raised themselves,” Spence said. “Project experience like this is very valuable to students when applying for jobs, because they will be able to point to a proven record of responsibility as well as an increased familiarity with engineering design techniques and principles as compared to their peers.” The Aerospace Engineering Club is currently working on their next payload for Harley III, which will transmit a live video feed during its ascension and will launch later this month. When the students return in the fall 2017 term, they expect to begin development of the CubeSat at Louisiana Tech. The club also plans to create a science, technology, engineering and mathematics outreach program to involve high school students in aerospace projects and introduce them to Louisiana Tech. Photos and video from the Harley II voyage can be viewed at http://orgs.latech.edu/aero/. Written by Brandy McKnight – mcknight@latech.edu