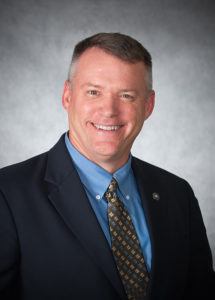 Mr. Jeffrey A. Pike, senior lecturer of civil engineering and construction engineering technology at Louisiana Tech University, was recently selected as Vice Chair for the Professional Engineers in Higher Education (PEHE) Executive Board for the National Society of Professional Engineers (NSPE). The NSPE stands today as the only national organization committed to addressing the professional concerns of licensed professional engineers across all disciplines. One of the stated goals of the PEHE Executive Board is to encourage professional licensure of engineering faculty and to encourage professionalism and leadership within institutions of higher education. Pike has invested 17 years in higher education since he started as an instructor at the United States Military Academy at West Point, New York (West Point), in 1995. Since then, he has served as assistant professor, professor, lecturer, and currently as senior lecturer. Pike earned his bachelor’s degree in engineering from West Point and his master’s degree in engineering from the University of Texas at Austin. He was asked to return to teach at the West Point Department of Civil and Mechanical Engineering from 1995 to 1998, and again in the Department of Chemistry and Life Sciences from 2001 to 2003. Pike was selected to become the Professor of Military Science at Stephen F. Austin State University from 2003 to 2007. He taught leadership and management and developed leaders of character to be commissioned as U.S. Army Lieutenants. Pike has exhibited leadership and service at Louisiana Tech since becoming a full-time faculty member in 2009. “It is an honor to get to serve,” Pike said of his selection. “This appointment on the PEHE Executive Board of NSPE gives me another opportunity to serve in my chosen profession at the national level.” In addition to his selection to the NSPE PEHE, Pike was selected last year by Governor John Bel Edwards to serve a six-year term representing higher education on the Louisiana Professional Engineering and Land Surveying Board. He currently serves as Chair of the Enforcement Committee and Co-Chair of the Applications Committee. Pike is also a member of the National Council of Examiners for Engineering and Surveying (NCEES), a national non-profit organization composed of engineering and land surveying licensing boards representing all U.S. states and territories. He is the chair of the Professional Engineers in Education Committee for the Monroe Chapter of the Louisiana Engineering Society. Pike has served on the Louisiana Tech University Senate and currently serves as Chair of a University Behavioral Standards Committee and as Chief Marshal for all University Commencements. He served on former U.S. Rep. John Fleming’s U.S. Service Academy selection board for several years. Pike served as an active duty airborne ranger infantryman in the United States Army for more than 22 years and earned the rank of Lieutenant Colonel before retiring from the armed services in 2007. He has earned professional engineering licenses in Virginia, Texas and Louisiana, and he is an active professional engineer in Louisiana. Pike is married to his high school sweetheart, Kelly. Together with their two sons, Matthew and Michael, who are students at Louisiana Tech, they live in the Arizona community near Homer, Louisiana. — Contact Brandy McKnight – mcknight@latech.edu