Feb. 1, 25 students from a variety of majors went head-to-head in Integration Madness at Louisiana Tech University, a tournament-style competition to see who would be crowned Supreme Champion of the Louisiana Tech Integration BEE. 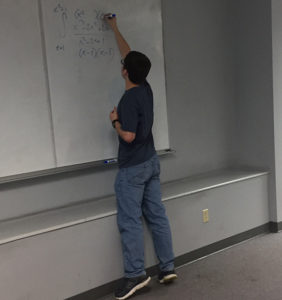 The title went to Mathematics and Biomedical Engineering sophomore Parker Willmon of Houston. For five rounds and more than 100 integrals, students stepped up to a whiteboard in one-on-one competition to solve complex integrals on the fly and under pressure. Early rounds were awarded to the first competitor who completed two integrals, while the final was determined by who was able to complete three integrals first. The final round, in which Willmon edged out Electrical Engineering freshman Mark Hidalgo of Slidell, consisted of 11 integrals and lasted nearly an hour. “I enjoyed the competition more than winning,” Willmon said. “It was challenging, and watching other students show off their integration skills was exciting.” Willmon says that solving the complex problems seemed natural after a rigorous Spring Quarter 2017 in which he took the Mathematics 242 calculus course. His professor required students to solve complex integrations, giving him the background necessary to match his fellow mathematicians in the competition. “I had to practice integration a lot during spring of last year,” he said. “Because of that effort, I got rather quick at solving integrals, and I felt I had a chance in the Integration BEE.” 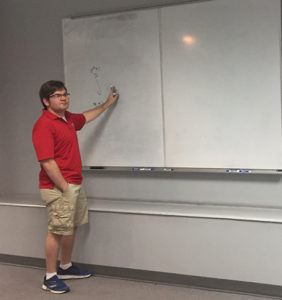 Dr. Jonathan Walters, lecturer of mathematics and organizer of the Louisiana Tech Integration BEE, says that the excitement buzzed through the room for the entire event, reaching an apex when he announced the winner of the final. “Naturally, the most exciting part was when Parker circled his final answer, and I said ‘Parker wins’! The group of people in the room erupted with shouts and boisterous applause.” You can see the tournament brackets at http://challonge.com/ceukujvk.