Louisiana Tech University has been voted in as a full member institution of the ATLAS detector collaboration, a particle physics experiment at the Large Hadron Collider at CERN, the European Organization for Nuclear Research. Although Louisiana Tech has been working on the experiment since 2005, its participation has thus far been through a joint agreement with Brookhaven National Laboratory in New York. “The contributions of Louisiana Tech University in ATLAS thus far have been exemplary and this recognition is well deserved,” said Dr. Srini Rajagopalan, senior staff scientist with Brookhaven National Laboratory and deputy program manager for U.S. ATLAS.  “I wish them good luck as an independent institute and hope they make major contributions to ATLAS in the coming years and decades. Dr. Michael Tuts of Columbia University, who serves as spokesman of US-ATLAS, added that the vote to include Louisiana Tech as a full member was unanimous. The ATLAS detector is searching for new discoveries in the head-on collisions of protons of extraordinarily high energy. ATLAS will learn about the basic forces that have shaped our Universe since the beginning of time and which will also determine its fate.  Among the possible unknowns are the origin of mass, extra dimensions of space, unification of fundamental forces, and evidence for dark matter candidates in the Universe. 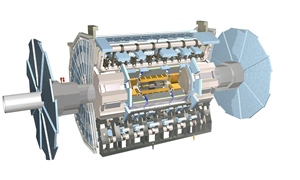 Computer generated image of the ATLAS detector – Courtesy of CERN

Dr. Lee Sawyer, professor and director of chemistry and physics at Louisiana Tech, and Dr. Dick Greenwood, professor of physics, have been the primary representatives for Louisiana Tech within the organization and were major participants in this summer’s announcement regarding the search for the Higgs Boson.  Along with Dr. Markus Wobisch, assistant professor of physics, several Louisiana Tech post-doctoral researchers have also participated in the work. ATLAS has involved students at many levels, from high school through graduate school. The research is having a big impact in inspiring young people to study and appreciate science, and then go into many fields using their skills including science, education, industry, finance, and public policy. A virtual “United Nations” of physicists, ATLAS is one of the largest collaborative efforts ever attempted in the physical sciences with representatives from more than 174 universities and laboratories in 38 countries. The ATLAS membership vote by CERN makes Louisiana Tech the only university in Louisiana to be a full member of an experiment at the Large Hadron collider, joining the ranks of such internationally-respected universities as Harvard, Berkeley, Oxford, and the University of Paris. Written by Catherine Fraser – cfraser@latech.edu